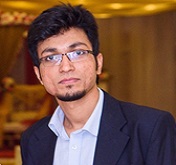 As an erudite engineer, Jamilur Rahman is serving research and education community of Bangladesh over last few years in both academic and professional realm. He is post-graduated in Information Technology(IT) from University of Dhaka, previously graduated in EEE from Islamic University of Technology (IUT), and currently employed in BdREN. He implemented the latest propitious technology, named Proxmox Virtual Environment on Data Center of BdREN, in where over 150 servers are operating under this new technology. Being an employee in BdREN, fortuitously he has been imposed to administer National Level EduRoam (Educational Roaming) system, which is promulgated throughout the world. He also contributed in implementation and support of SNMP monitoring software and other network monitoring tools.

Mr. Rahman accorded many local and International training on Data Center, Virtualization, and cloud computing. His focused areas are Cyber Physical System, Virtualization Technology, and Cyber Security. He has two academic publications in the International Journal on Cybernetics & Informatics (IJCI) and the International Journal of Microwave and Optical Technology. His prowess in Unix OS, Virtual platforms, and containerization(LXC, LXD) elicit tremendous efficacy in the organization. He is also skilled in CCNA, and has solid understanding in network traffic analysis with WireShark, NfSen. Moreover, to contrive a security census on e-commerce and government websites for research purpose, he also developed an extension tool, named Security Scrutiny, which was published in Mozilla repository.